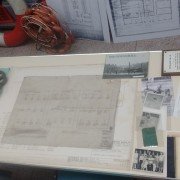 Out with the old in with the new – well not exactly!!! Here at Govanhill Baths Archive we treasure the rich, diverse, fascinating and ever-changing stories, people and events which have shaped the history of Govanhill Baths.

On the 28th February 1917, Calder St Baths and Wash house opened it’s doors to the public for the first time – watch this space over the next few months as we celebrate this momentous occasion.

Welcome back to the Archivist’s Blog! This week I’ll be sharing with you some of the musical treats we have here in our collections.

My task right now at the archive, and for the foreseeable future (!), is to create ‘Box Lists’ of the collections. Essentially this means creating a written record of all items we have in our stores, with the aim of making them easier to access.Yesterday I finished sorting through my first box, which is part of the ‘Save Our Pool’ series. These items all relate to the political actions launched by the Govanhill community between 2001 and 2004 to protest closure and gain support for reopening the pool. The materials are fascinating, ranging from flyers to legal documents, collection boxes to surveys.

However what stood out most to me was the wealth of musical items from this exciting time of the Bath’s history. 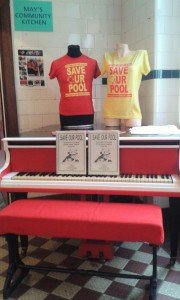 By late April 2001 the occupation of the Baths was well underway, the community having first taken control of the building on March 21st. To commemorate the success of this direct action, ‘Southside Against Closure’ decided to publish a book of protest songs. The result was ‘The Govanhill Official Souvenir Songbook Volume One’. 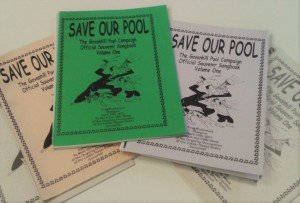 This booklet consists of 17 songs, a mixture of original compositions and re-workings of pop and folk songs. It’s a fantastic example of the British political musical tradition, and captures the excitement and energy that galvanised the community at this time.

Also contained within the box are several rough drafts of songs found in the songbook. One that stands out is a tune addressed to the Labour Councillor Charles Gordon, the then Leader of Glasgow City Council. The song, though untitled, is sung to the tune of ‘The Wild Rover’, and uses humor to pressurise the politicians to act. Particularly funny is the chorus:
“So it’s come on Charlie, Gonna Gie Us a Swim, Cos I’m a wild swimmer, Won’t put my trunks in the bin”. 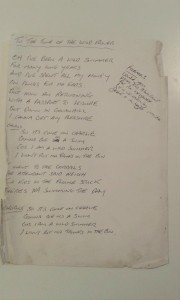 Rough draft of the Govanhill version of ‘The Wild Rover’ 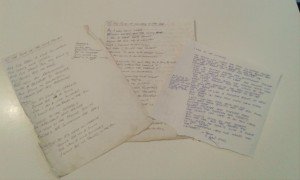 Later in 2001 many of the songs featured in the songbook were recorded and put onto an album entitled ‘The Song Factory’, released through Red Rattler Records. We have several copies of the album in the archive. I’ll try and upload one of the songs to the blog later in the week. 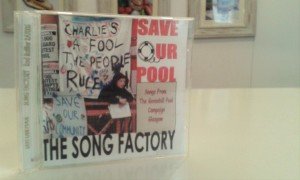