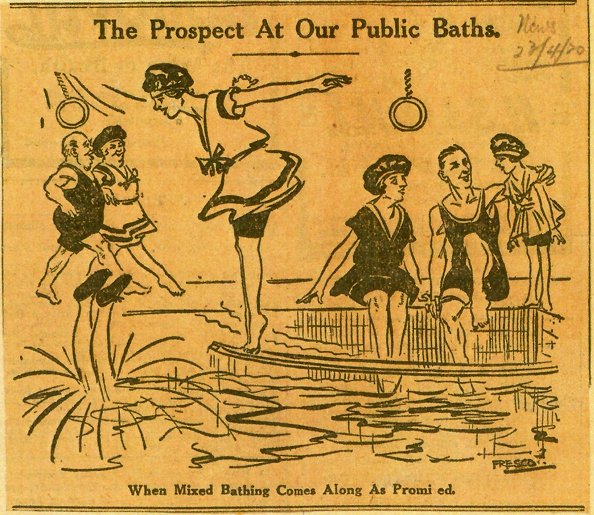 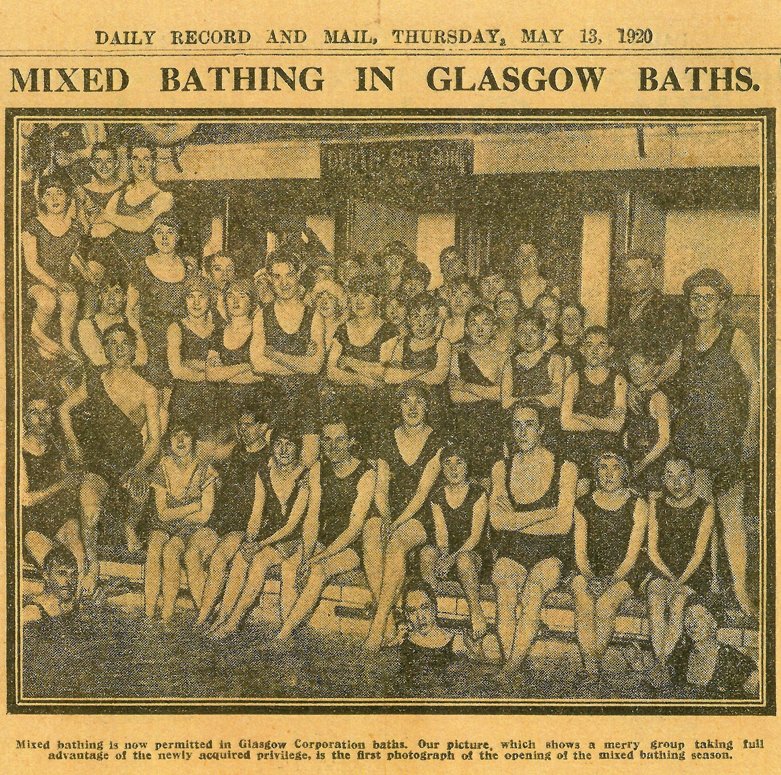 In 1917, women did not yet have the vote and swimming, one of the great sports and leisure activities of the time, was still strictly segregated. Mixed bathing had been permitted in some English pools for a few years, but Glasgow Corporation still did not permit men and women to swim together.

The prospect of mixed bathing was a contentious issue and filled many with horror. One outraged citizen of Glasgow wrote to Evening Times and said, mixed bathing was ‘an affront to decency and decorum’ and he hoped ‘never to see it in his lifetime’. Another letter writer replied, demanding to know of the first writer what ‘degrading metamorphosis his mind went through while he gazed on the indecent mingling of the sexes’. Yet another writer proposed a practical solution and suggested that the balconies around pools, previously only opened on Gala Days, be opened to spectators at any time, and this would act as a ‘safeguard’ to impropriety.

When Govanhill Baths opened in 1917 there were two entrances, one for men and one for women. The entrance nearer Victoria Road was the men’s entrance and the entrance nearer Ardbeg Street was the women’s entrance. Once inside, there was an imposing office in the space between the two front doors that formed an effective barrier between the sexes. There were windows on either side of this office to collect payment.

When a ticket had been purchased, men would go directly through to what was then called the Large Pond and women would take a slightly longer route to the Small Pond or perhaps to the Learner’s Pond.

Many other existing baths at the time only had one pool and women were only permitted access for a few hours on one day of the week, when the men would be excluded. The two pools at Govanhill were probably seen by some as quite an enlightened solution at the time but even that compromise would not last.

In the aftermath of war, new freedoms were demanded, the restrictions of the past were about to change in many ways. Couples and families wanted to swim together and in 1918, Glasgow Corporation began to relax the rules, women were permitted to swim in the same pool as men but not at the same time, there were just more sessions available to them. Then a little later, women were permitted to swim on one side of the pool and men on the other, while staff patrolled the edges to discourage inappropriate mingling. Such ineffective regulations were never going to last, a few daring women and men defiantly swam where and with whom they wanted and finally in 1920, Glasgow Corporation bowed to the inevitable. At first, only swimming clubs were permitted to offer men and women the chance to swim together, the Socialist Swimming Club was one of the first to enjoy mixed bathing at Govanhill but eventually, inevitably the right was extended to all.