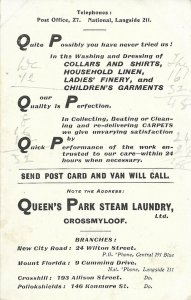 The Laundrettes versus The Steamies

Before World War Two, commercial laundries offered an alternative to municipal steamies or wash houses but they were generally too expensive for ordinary people, the washing was done for you by in-house staff and you collected it a day or two later.

After the war, American style laundrettes slowly began to appear in the UK, they were quicker, faster, and cheaper and you did the work yourself. Many women still preferred the sociability of the steamie and the quality of washing available with the older machines at the steamies.

Over the next couple of decades, washing machine technology improved and in time, many steamies became more like modern laundrettes. The new machines took only a fraction of the time but could only carry about half the load of the older machines. The council claimed it was harder to repair the older machines but many local women mocked that claim and said if it was possible to put a man on the moon, then it surely was possible to fix a washing machine. Many women were against the changes because the new laundrette system abolished the traditional booking system, which allowed women to book their hour in the steamie, up to a week in advance, and this allowed them to arrange their week, including getting someone to look after the kids. For a busy woman with little time to spare in the week, this system was ideal.

The council hoped by reducing washing time to increase turnover, and offered coffee machines and easy chairs as consolation for a less than white washing; however many women would have willingly paid a little more for their washing and foregone the extra comforts.
There were many protests and petitions against the changes, but they were ultimately unsuccessful. 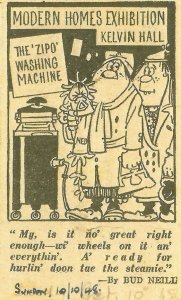 Govanhill Steamie was modernised in 1973. Just before opening, James Russell, head of the Corporation Baths Department at that time, wrote to a local magazine called ‘The View’ to explain the changes: ‘The modernization of the washhouse is well underway after an initial set back caused by the builders strike last year. The new washing machines tumble-driers, hydro-extractors and ironing machines have now been delivered and placed in position and it now remains to connect water, power, steam etc. In the meantime the existing machines are working as usual and there is no interference with the service but when we when we come to finish the floor at the entrance then the washhouse will have to be closed for perhaps 2 weeks.

The new machinery will be modern and compact and will be accommodated in the area of existing wash house. This will give the new washhouse the appearance of a laundrette and the customers will not have such great distances to walk between the washing machines and dryers. New stainless steel sinks are being installed and they will be hidden away in a separate area so that the main floor can be kept dry.

When the new machines are in operation we will fit a false ceiling with concealed lighting and cover the old glazed brick with wood panelling and other finishes to give the place a more pleasing appearance.

The new machines should be in operation by the beginning of May and the building, operation and decoration completed sometime in August. I enclose the photograph of the wash house showing on the left where the floor has been dug up in preparation for the new floors and plinths for the machines being laid.’

Mrs Margaret Toye of 93 Prince Edward Street, speaking to The Southside News in 1975 said she does one washing a week and the average waiting time is an hour. Mrs Toye said she had been using Govanhill wash house for 30 years first with her mother and then in her own right.

Says Margaret ‘The new machines take only about half the washing and have been moved to the back of the building. That really is an improvement you’re not ploughing through water all the time and with these new machines you don’t get soaked when you’re taking your washing out, it’s almost dry. The mangles and the folding tables have been retained and of course they’ve got the easy chairs, but you don’t get as good a wash, you can’t with only 20 minutes. But it’s still better than the ordinary laundrettes. I preferred the booking system. The kids still aren’t allowed in, so it means you have to leave them in this waiting room. It didn’t used to suit everyone though; it was more geared to the housewife. Now it stays open later. The last wash used to be five o’clock, which was not much use for working people. Now it is 8:00 PM most days. A lot of people who used to have to go to the commercial laundrettes now come here.’