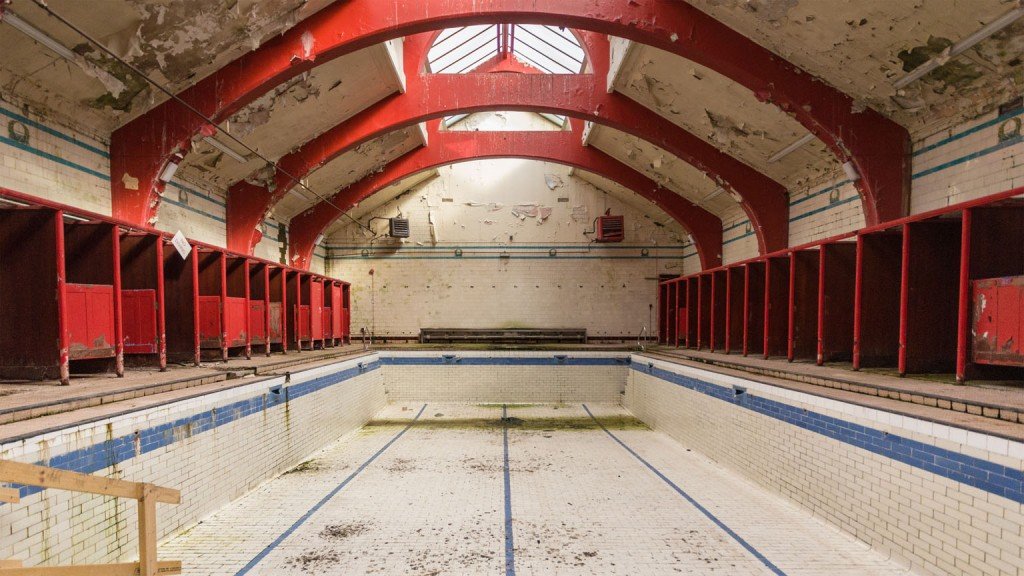 As we get closer to the start of the construction work, we thought it would be good to introduce you to the photographer who is going to be documenting the process. John Aldred is a professional photographer based in Wishaw. Because he is often sent equipment to test by camera companies, he has generously offered to document the entire refurbishment at no cost to the Trust, in return for being able to blog about the process! This also means that the baths building will benefit from the very latest in camera technology and techniques. Here, in his own words, is a little more about John:

“I’ve been a photographer for around twenty years. I’ve been shooting timelapse for as long as I’ve owned digital cameras, and have been making video for about the last ten years. I’ve tried all kinds of things in that time, including landscapes, cars, sports, wildlife, and product photography. Nowadays I mostly photograph people in the wild and animals in the studio!

“For the baths’ refurbishment, I hope to document the before, during, and after phases of the restoration, with timelapse, stills photography, and some recorded interviews regarding the history and future of the baths. I want to show what the baths means for the community, and to explore how the baths and community have helped each other, particularly with regard to the whole global pandemic situation this year. I will also create regular progress updates along the way, as the baths hits certain milestones in its restoration.

“I came to have a look around the baths in February, to get some ideas for the documentation. Walking around the building in its current state was a fascinating experience. To see the difference in design, architecture, and overall style, compared to baths constructed in more modern times, as well as seeing a building that’s been relatively untouched for 20 years, felt a bit like being a kid again with that anticipation and excitement of seeing something for the first time.

“Below is an example of my timelapse work, showing the germination of some cress seeds. It was shot specifically to test out certain camera gear for long-term timelapse work in preparation for documenting the baths. I didn’t expect to shoot for as long as I did, but issues kept popping up, so I had to keep shooting, and people seemed to like the final result. So now it’s taken on a life of its own and there will definitely be more in the future! All in all, I’m looking forward to following the baths on its restoration journey back to its former glory over the coming months.” 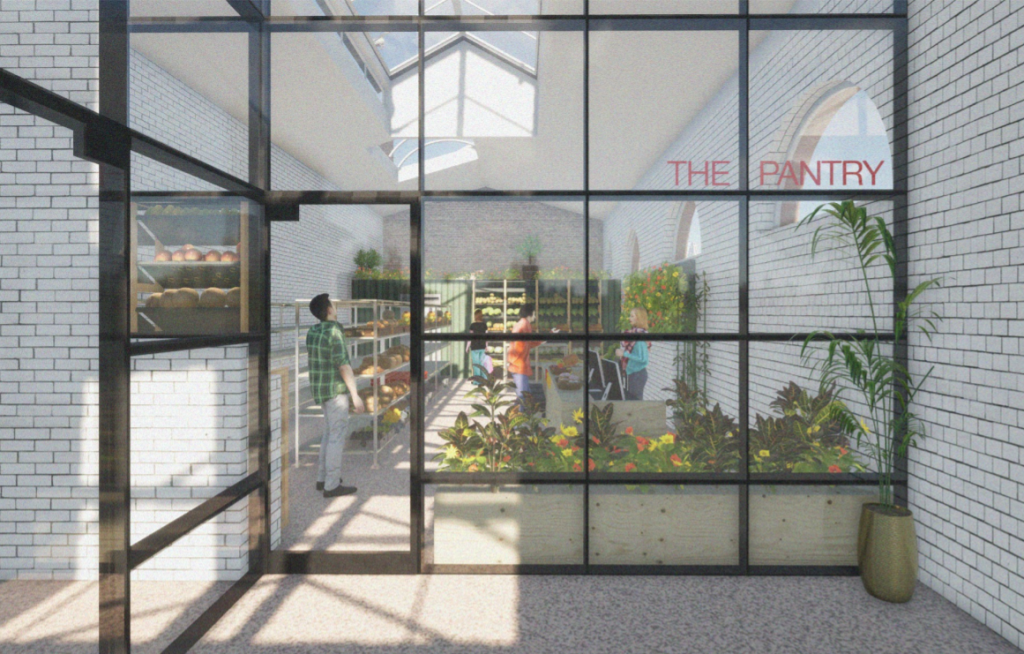 Here is a sneak peek of The Pantry, which will be part of the refurbished baths building! The Pantry will offer fresh, healthy, and good quality food at subsidised prices, thereby providing a sustainable and dignified option for people facing food insecurity, with the aim of reducing reliance on food banks. By making the food more affordable, people will be able to spend less of their household income on food and use it for other necessities such as energy bills and clothing.

How will this work? We are going to use a membership scheme, where people will pay around £2.75 per week and be able to take away £15 worth of groceries. The food itself will come from sources such as FareShare, an organisation which aims to redistribute food which would otherwise go to landfill. So on top of being affordable and nutritious, the Pantry will be good for the planet as well!

Both of these projects form part of our plan to make the refurbished baths building as accessible as possible, creating a wellbeing centre which truly reflects the needs of local people. The plans include a fully accessible entrance for people with mobility problems; a Changing Places toilet for people with complex disabilities; and state-of-the-art poolside equipment to ensure that everyone can swim in the pools, no matter what their needs. We are also working to ensure that the building is welcoming to neurodiverse audiences, from planning a trip on the website through to enjoying a visit once here.

We are hoping to open the Pantry at the end of 2021, as part of the grand reopening of the refurbished building. In the meantime, due to the severity of the current situation we are opening The People’s Pantry on Cathcart Road, to help people suffering from food poverty during the Covid-19 outbreak. For more on that, click to read more on the People’s Pantry.

Glasgow Golf Club was formed in 1787 and played originally on Glasgow Green. The need for recreational space in the growing city of Glasgow was intense though which meant the sport could not continue at Glasgow Green, and the club folded in the 1830s.

Some members of the Prestwick Golf Club, formed in 1851, lived and worked in Glasgow and were keen to establish a club closer to the city and so in 1870, the Glasgow Golf Club was reconstituted.

The new South Side Park (or Queen’s Park as we know it now) was the site they chose. Charlie Hunter, the professional from Prestwick, laid out a 9-hole course on the recreation grounds but there were no bunkers at this stage. Membership was a guinea per year and a fee of £2 per year, was paid to the keeper of Queen’s Park Bowling Club, to look after the golf clubs and the greens.

The first match was played on the 5th of March 1870, Young Tom Morris, the leading Scottish professional at the time and winner of four successive Open Championships by the age of 21, joined the Lord Provost, the captain of the club and others.

The course would not have compared favourably to courses of today. Lawn mowers had recently been invented but those would have been used only on the greens, the grass on the fairways would still be very long and would need to be scythed but somehow the golfers managed and in 1873 invited another club, Leith Thistle to play a competition.

Discussions moved on to building a clubhouse and the Parks Department granted permission for a building to be erected but the sport was not as popular in the city as it was on the coast, the club was still relatively small and afraid of accruing debt, decided to quit Queen’s Park and move to Alexandra Park, in the east end of the city which was more affordable.

There is still to this day, a 9-hole golf course at Alexandra Park but Glasgow Golf Club have prospered and moved on to own two courses, one near Bearsden and another on the coast, near Irvine.

There were calls to bring golf back to Queen’s Park, when the park was expanded in the mid-1890s but that seems to have come to nothing.

On Sunday morning I went to Cathkin Park to hear the dawn chorus. May and June are the best times to hear this amazing daily concert, as birds are trying to find partners for the mating season while at the same time defending their territory from other hopefuls! Cathkin Park is an especially magical place to hear the chorus, as for nearly 100 years it was the home of Third Lanark Football Club, one of the founding members of the Scottish Football League. It is quite spooky to stand on the pitch and hear the birds singing out from the deserted terraces, imagining the voices of the thousands of fans who would have cheered from the exact same spot some 70 years ago. 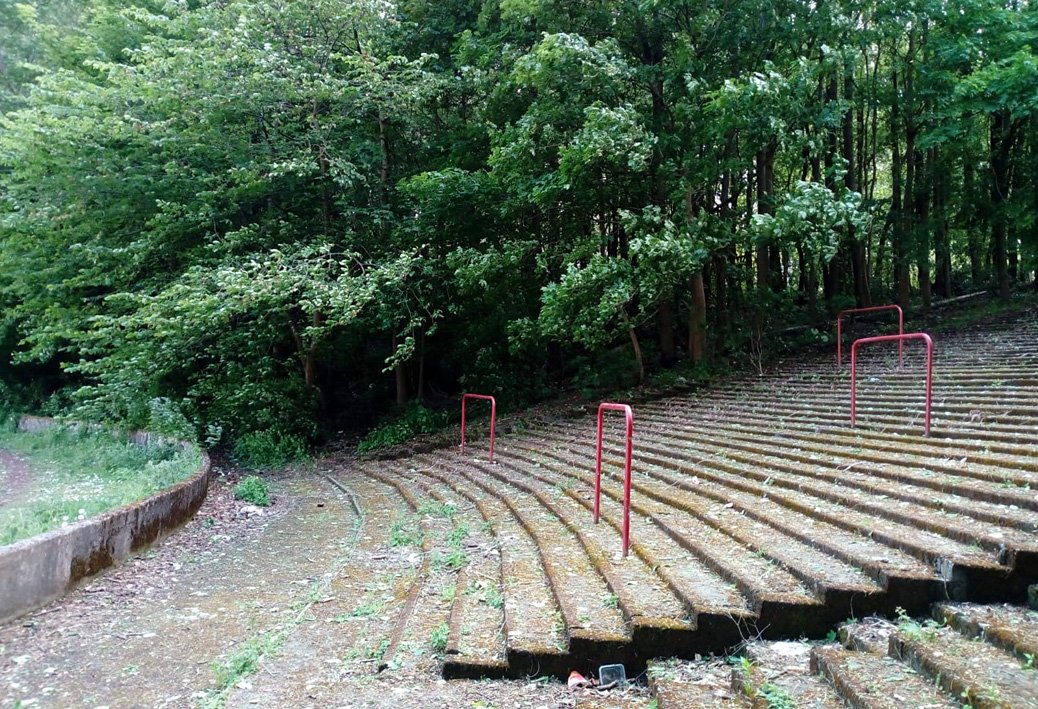 I got to the park around 4:00am, which is about an hour before the sun rises. In a 2-hour walk around the park I heard at least 12 different birds, with a few surprised foxes being the only other creatures about at that hour. It is good to check the weather forecast before heading out, since it is very difficult to hear birdsong when the wind is blowing. Thankfully the conditions were pretty good, as the previous night’s wind and rain had disappeared. I felt very lucky to be able to forget about the chaos of the world for a few hours, and just to lose myself in the beautiful birdsong.

On my walk around I made lots of small recordings, which I have stitched together into a five-minute audio track. It’s best to listen with headphones, because then you can really immerse yourself in the sounds of the outdoors.

This is what you can hear:

Right at the beginning you can hear a plucky wren churring away. These tiny birds make so much noise! In the background there is a song thrush, singing its heart out in short, repetitive phrases.

The little barks you first hear here are the jackdaw, a smaller cousin of the crow. You can hear them squabbling at 1.52.

A crow speaks up during the jackdaws’ arguing, maybe to tell them to pipe down!

This is recorded from a different part of the park, and you can really hear the finches getting stuck into their songs. It is hard to pick out individual birds here, but you can hear both goldfinches and chaffinches giving it their all. The deeper notes you hear in the background are from a stately blackbird, who is often the first one to start singing at dawn.

This rattling sound is the magpie, large flocks of which kept swooping over the pitch.

Many of you are probably familiar with the plump woodpigeon, just starting to get involved here. Woodpigeons are very funny to watch as they are extremely clumsy and make a lot of noise when taking off!

At some point during the walk I also heard the faint rattle of a mistle thrush, a bird which is quite a common sight in Cathkin Park. The wind must have swallowed its call, which is a shame because the mistle thrush sounds just like the old football rattles that would have been whirring around the terraces in the 1960s.

Would you like to listen to the dawn chorus? My advice would be to go soon, as the birdsong is best before the middle of June. You don’t have to go to the park at that time in morning: you could also just open your bedroom window and have a good listen. And if you want to record what you hear you don’t need any fancy equipment: I just used the sound recorder on my phone. To read a bit more about the dawn chorus and to get some top tips, visit the RSPB’s website, which also has a great Birdsong ID feature to help you identify what you heard. Click here to visit the RSPB website.

Tell us how can we improve this page or our services.