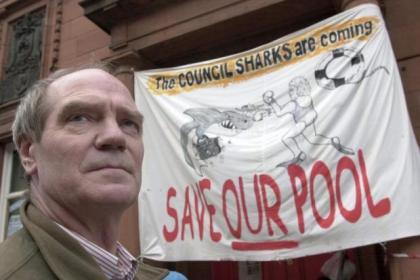 In 2001, when Glasgow City Council decided to close the baths in Calder Street, a very varied group of people came together to fight the closure. Andrew Johnson had seen 4 of his children learn to swim here as part of the highly regarded Kingston club, and was one of the earliest to start organising against the closure.
Over the next 14 years Andrew, more than anyone, guided and led what became one of the most effective and historic political campaigns in Glasgow’s history. The campaign against the closure became a campaign to re-open and a campaign against demolition. In 2004, in response to the council’s decision to seek a buyer, The Govanhill Baths Community Trust was formed. Andrew became Chair of the Trust and, in that role, forged an organisation that has exceeded expectations and now stands on the brink of refurbishing the building in to a “Well Being Centre”.
It is this vision of a centre that goes beyond swimming, a community asset that addresses the physical mental and social health of the community the people most associate with Andrew.
It is virtually impossible to find words to fully describe his contribution, such was the impact of his leadership and guidance over the years. The gap left by his departure will be hard to fill.
Govanhill Baths Community Trust wishes to thank Andrew for all he has done for this community. When the pools reopen and Govanhillians swim again, it will be a legacy that many people share but he can be more proud of than most. It is hard to imagine how we could have continued the campaign over a decade and a half and reached the stage we are at right now without him. He is, and always will be, a legend in the history of Govanhill Baths.
Thank you Andrew.