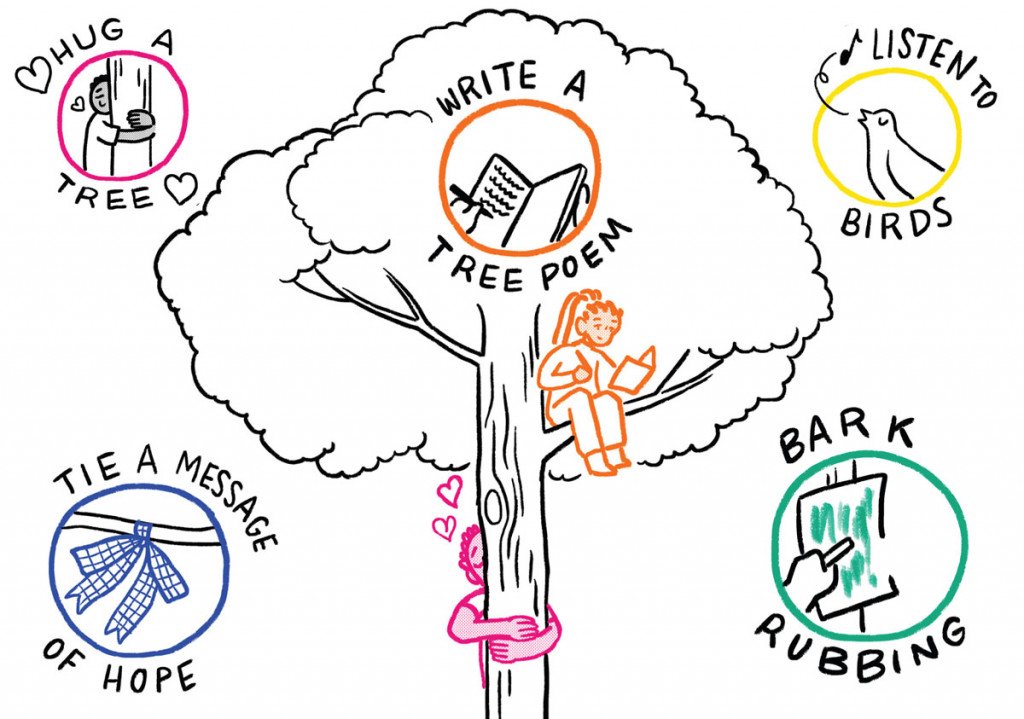 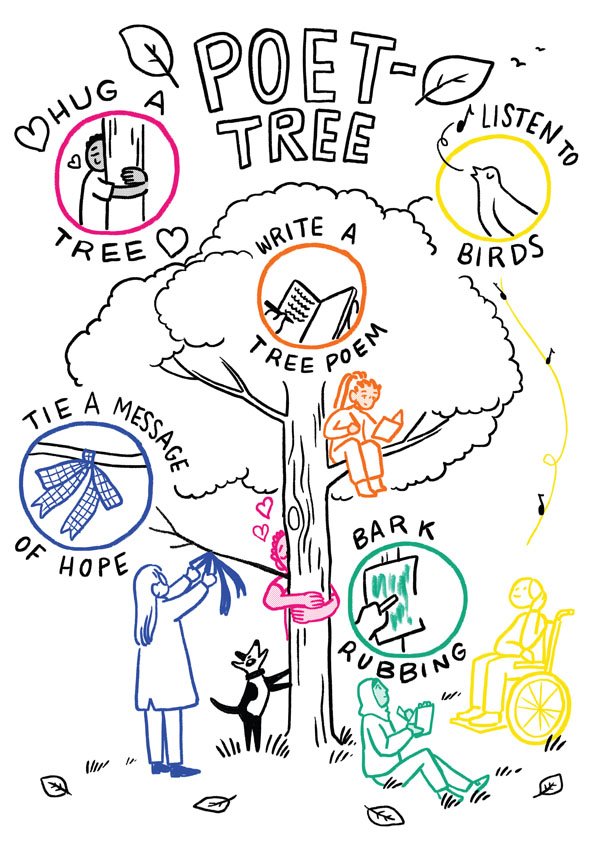 Explore other activities in this series:

See All Postcards Self-Massage
Breathing Exercise for Relaxation
Spend Time in Nature
Mindfulness Bodyscan
Look and Draw
Make a T-Shirt Mask
We'd be very grateful if you can complete an anonymous survey and let us know your thoughts on our Wellbeing Postcards:
Tell Us What You Think

Spending time with trees is really good for our mental and physical wellbeing. The Manchester City of Trees website has found 9 ways in which they can help us live healthier, happier lives, including easing depression, improving air quality, and bringing people together. And there are many ways to interact with trees: we can sit under them, carefully climb them, make rubbings of their bark, even give them a great big hug! The list is endless.

To get you started discovering trees, we thought we would go for a walk around the green spaces in Govanhill, to see what amazing trees we have in the local area. Here are some of them:

These trees are dotted around the edges of the park, close to the railings.

These trees are all in the area around the flagpole, at the highest point in the park.

Another wonderful thing about trees is that they are a home for birdlife! Early in June I went to Cathkin Park to hear the dawn chorus. May and June are the best times to hear this amazing daily concert, as birds are trying to find partners for the mating season while at the same time defending their territory from other hopefuls! But it is still worthwhile getting up early at any time of year, to hear the birds before human noises start to muffle them.

On that day I got to the park before sunrise, and in a 2-hour walk around the park I heard at least 12 different birds, with a few surprised foxes being the only other creatures about at that hour. It is good to check the weather forecast before heading out, since it is very difficult to hear birdsong when the wind is blowing. Thankfully the conditions were pretty good, as the previous night’s wind and rain had disappeared. I felt very lucky to be able to forget about the chaos of the world for a few hours, and just to lose myself in the beautiful birdsong.

On my walk around I made lots of small recordings, which I have stitched together into a five-minute audio track. It’s best to listen with headphones, because then you can really immerse yourself in the sounds of the outdoors.

This is what you can hear:

0.01
Right at the beginning you can hear a plucky wren churring away. These tiny birds make so much noise! In the background there is a song thrush, singing its heart out in short, repetitive phrases.

0.42
The little barks you first hear here are the jackdaw, a smaller cousin of the crow. You can hear them squabbling at 1.52.

2.06
A crow speaks up during the jackdaws’ arguing, maybe to tell them to pipe down!

3.08
This is recorded from a different part of the park, and you can really hear the finches getting stuck into their songs. It is hard to pick out individual birds here, but you can hear both goldfinches and chaffinches giving it their all. The deeper notes you hear in the background are from a stately blackbird, who is often the first one to start singing at dawn.

3.33
This rattling sound is the magpie, large flocks of which kept swooping over the pitch.

3.44
Many of you are probably familiar with the plump woodpigeon, just starting to get involved here. Woodpigeons are very funny to watch as they are extremely clumsy and make a lot of noise when taking off!

We hope you have enjoyed this exploration of the wonder of trees. What have you seen on your daily walks? Let us know by emailing us katherine@govanhillbaths.com or by tagging us on social media!

Click and Tell Us What You Think About Our Postcards