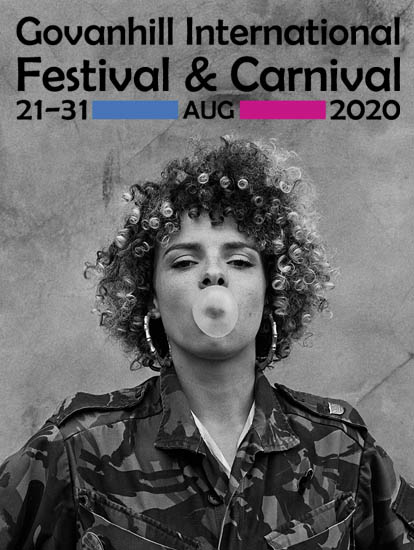 Open-Air Screening of La Belle et la Bête, 1946, hosted by GAMIS. An early cinematic iteration of the Beauty and the Beast story we all know and love, told through the surreal imagination of Jean Cocteau. We have selected this title to fit within the Govanhill International Festival theme of anti-racism since the character of The Beast in La Belle et La Bête transforms when shown love and compassion. This encourages us to look beyond our first impressions of those we may initially view as ‘other’ because they look, sound or behave differently to ourselves and our families. The story teaches us that empathy, creativity and imagination can change us and those around us.

(GAMIS in association with Music Broth)

It’s three years since the first Govanhill Festival took inspiration from the Rock Against Racism (RAR) movement hosted Roots, Rock, Reggae Against Racism in Queen’s Park bandstand with Aswad, Misty in Roots, Black Roots and more.
Glasgow Love Music Hate Racism (LMHR) has since taken its own inspiration from that momentous movement as a new generation forges unity through the power of music in the struggle against racism and the rise of the far right.

This summer racist thugs unleashed violence on our streets. The terrible incident at the Park Inn Hotel shone a light on the conditions created for refugees by the UK government’s hostile environment. We need unity more than ever to ensure that black lives and refugee lives matter.

Glasgow LMHR and Modern Films will screen Rubika Shah’s award-winning film White Riot, documenting the RAR movement and its 1978 Carnival Against The Nazis, plus a panel discussion with the director, home grown RAR punks and special guests. The night concludes with a special LMHR Living Room afterparty.

(Love Music Hate Racism in association with The Rum Shack)

Paul Fegan’s first feature documentary follows Scottish cult-pop raconteur and former Arab Strap frontman Aidan Moffat as he tours Scotland in 2014, performing his modern re-interpretations of old folk songs. It was meant to be a tour that celebrated communities and lore. But just before they hit the road, Moffat met Sheila Stewart: a 79-year-old force of nature, the last in a line of travelling folk royalty, and a balladeer whose life – and unexpected death, in 2014 – upturned Moffat’s folk assumptions, and diverted the course of Fegan’s film. The ensuing film is a warm-hearted journey through music, mortality, landscape and time. It’s also a moving, wry and enlightening depiction of two of Scotland’s most distinct and vital voices, as they cross paths (and words). The screening will be followed with a Q&A with Director Paul Fegan.

(In association with The Rum Shack)

Will be rescheduled for later date

Following the success of last year’s CineRoma, the UK’s first Roma Film Festival in partnership with Southside Film, Romano Lav will be hosting a special film screening during this year’s Govanhill International Festival. Our selection committee of young local Roma will be selecting their favourite film from last year’s programme to show on the day. The film will be preceded by an introduction with reflections on the importance of CineRoma 2019 and the film’s inclusion in GIFC festival 2020.