In its last 72 hours Govanhill Baths Community Shares Campaign has received £100,000 of funding from Big Society Capital, a UK government-backed fund that invests in social enterprises.

This funding was only awarded once Govanhill Baths itself had raised £100,000 from individuals and organisations investing in it through Community Shares and takes the total raised to over £220,000.

Alan Walsh, Chair of Govanhill Baths Community Trust said: “This is a key moment for the community. The historic struggle to reopen Govanhill Baths is rapidly coming to a conclusion that because of the support of individuals and Big Society Capital will be one of great joy.”

Community Shares are a way for people to fund and run local projects together. Shareholders in Govanhill Baths will have a direct say in the running and the future of the project. Importantly, no matter how much a person invests everyone has an equal say.

Govanhill Baths Community Shares fundraising drive was launched on 22 September by local MSP Nicola Sturgeon who said of the campaign to reopen the Baths: “It has signified a community refusing to accept what others said had to happen and deciding it was going to shape the future differently and that is inspirational.”

Most of the funding is in place to start the rebuild next year but the funds raised through the Community Shares are crucial to the future of the project and the final goal to bring public swimming back to Govanhill.

Govanhill Baths Manager Fatima Uygun praised those who have invested: “We have been overwhelmed by the support we’ve received. Almost 400 people have now purchased shares; an incredible achievement in an area with Govanhill’s challenges. Proof that the community’s wish to see the Baths reopen has not diminished one bit since our struggle began in 2001.”

In raising £220,000, the organisation has reached the minimum for the campaign and has now set its sights on getting as close to its maximum target of £300,000 before the deadline of midnight on 30th November.

“There is still time for people to invest and become owners of this iconic and much-loved building,” Fatima Uygun continued. “We want to make this year’s St Andrew’s Day a celebration also of what people can achieve when they work together.”

Further details of Govanhill Baths plans for redevelopment and Community Shares campaign can be found at: www.crowdfunder.co.uk/govanhill-baths/ 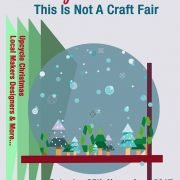 Govanhill Baths Community Trust’s upcycling social project Rags to Riches presents the 6th edition of its popular upcycle Christmas craft fair. This Is Not A Craft Fair is set to get us all on the way to a great eco- friendly Christmas once again.

The fair provides an opportunity to purchase products and gifts that are made with post-consumer waste, unloved & found objects destined for landfill which have been transformed, re-used and re-designed into unique high quality products by a fabulous array of local makers & designers.

This year will see the usual staples of upcyclers along with some new emerging designers who will bring more innovative, quirky products made with love.

The prefect place to get that unique eco-gift for your loved one or a wee Christmas treat for yourself whilst being part of the environmental Christmas movement.

The Fair opens at 11am, there will be cafe opertaing all day, closes at 6pm

We hope to see you all there 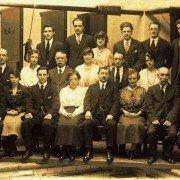 The Govanhill Baths Community Trust is looking for new Board members who are committed to helping the Trust re-open the Baths as a Wellbeing Centre and contribute to the social, cultural and built regeneration of Govanhill as a community on the Southside of Glasgow.

These are exciting times for the Govanhill Baths Community Trust. After 15 years of determined campaigning the GBCT has been awarded substantial grant money to begin work on bringing the building back into operation. We have raised 95% of the funding needed to start the restoration and refurbishment of the building. We are currently in the process of issuing community shares in the project and transferring to a community benefit society.
The refurbishment is scheduled to begin in 2018 and will bring into service the Ladies’ pool, Learners’ pool, Turkish Suite and Sauna, Gym, Rooftop Gardens, a Community Kitchen/Cafe and Multipurpose community spaces. While the former public washhouse, or ‘steamie’, will be turned into a theatre venue and community events and arts space.
Applications are particularly invited from people who are willing to share their knowledge, skills or experience voluntarily in one of the following areas:

Visit our website to find out more about the wide ranging work of the GBCT. To request an information pack please email info@govanhillbaths.com

The Board currently meets on the first Tuesday of every month at 7pm at the Govanhill Baths at 99 Calder Street, G42 7RA.

This is a voluntary position. 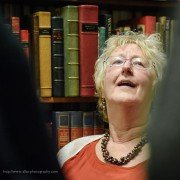 A group of poets and spoken-word artists in Scotland have written and recorded poems specially written for the historic Govanhill Baths project in Glasgow’s Southside. Inspired by the Nationwide Building Society’s series of TV adverts the writers, including Stu Who, Victoria McNulty, Leyla Josephine and Liam McCormick, have come together to help the Baths with their Community Shares campaign.

Govanhill Baths, a 100 year-old Edwardian swimming pool and wash-house, was closed by Glasgow City Council in 2001. Famously, the local community refused to accept the closure and occupied the building, leading to what is still the longest continuous occupation of a public building in UK history. In 2012, Govanhill Baths Community Trust (GBCT) returned to the building and have been operating a community centre and arts venue in the near-derelict building, repairing as they go. Earlier this year they opened the first of three swimming pools, The Learners’ Pool, bringing swimming back to Govanhill for the first time in 16 years.

Ambitious plans to renovate the full building into a Health & Wellbeing Centre are close to coming to fruition. The Community Shares are the final part, allowing the community to not only invest in the protect but to take ownership through a Community Benefit Society that will be formed by the shareholders.

Poetry and spoken word have played a major role in the development of the campaign, the Baths is home to regular events including the annual “Govanhill Poetry Splash” that has featured top acts such as Hollie McNish, Liz Lochhead, Tom Leonard, Iona Lee and others over the last five years. Hollie McNish was inspired to write a poem for the campaign. “Govanhill” tells the story of her grandmother’s memories of using “The Steamie”, the Glasgow word for a public laundry. Hollie said: “I love visiting and performing at the Baths, it’s a magical place.”

Veteran poet Jim Monaghan, Arts Coordinator with the project, said: “Earlier this year, on National Poetry Day, Glasgow’s Poet Laureate Jim Carruth wrote a poem dedicated to the campaign. Talking to other poets about Jim and Hollie’s poems led to a discussion about the Nationwide poets, the themes in those adverts were very similar to our own campaign, sharing and communities working together for mutual benefit. So, a few of us decided to write and record our own little films in the Nationwide style.”

So far, eight poets have got involved with more busy penning specific poems for the cause. Jim Monaghan kicked it off with his poem “building society”, Colin Poole, legendary comedian Stu Who, Victoria McNulty, Jane Overton, Leyla Josephine, Liam McCormick and Tickle have all recorded work that will be released on social media, one per day for the duration of the Community Shares campaign.

Julian Dawydiak, Marketing and Campaigns manager said: “Poetry is such a great way of reaching people and spreading the message. We hope these poems will encourage more people to get involved and invest in the project, buying shares in Govanhill Baths. Community Shares are not just great way of funding projects like this, they are also good for the individual too with the 3% interest we’re offering on their investment along with 50% tax relief available for eligible UK income tax payers. And no matter how much a person invests everybody will have an equal say in the running of the Baths.”

For further information please contact info@govanhillbaths.com or telephone 0141 433 2999 and to take part in the Community Shares campaign please visit: www.crowdfunder.co.uk/govanhill-baths

and us kids could splash in bubble fights
as mum and mates all gossiped shite
and we ran around the baths
laughing in the bucket rain
My arse hard times!

She explained
The steamy was our break
And if she could
She would still wash
and play
in Govanhill
today.