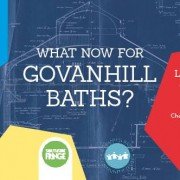 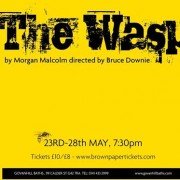 This year’s production for the Southside Fringe Festival is The Wasp, written by Morgan Malcolm and directed by our own Bruce Downie.

This scintillating thriller sees Carla and Heather, a school bully and her victim, reunited after 20 years. As they catch up over cups of tea it becomes apparent that their lives could scarcely be more different: Carla struggles to make ends meet and, with her fifth child on the way, is still sucking on cigarettes; while Heather has a successful career and a beautiful home, which she shares with her husband. But awkward conversation soon makes way for dramatic revelations as Heather presents Carla with a big bag of cash and a shocking business proposal.

Govanhill Theatre are committed to bringing community theatre to this area, if you live within the G42 postcode, there are £1 tickets available for all of our productions, contact Jim on 0141 433 2999 info@govanhillbaths.com for details.

The Wasp runs from Monday 23 May until Saturday 28 May at 7.30pm, tickets are £10/8 conc from Govanhill Baths Community Trust in Calder Street or from www.brownpapertickets.com 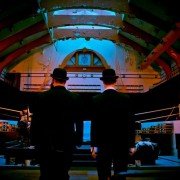 The ever-growing Southside Fringe Festival is back at the Baths for the third year.  For the next ten days there is an exciting programme of music and theatre events.

The Paper Bag is  new play by award winning Ppaywright Heloise Thual. This premiered at the Tron theatre in Glasgow in March 2016 and Director Lesley Eadie is bringing it to the Steamie theatre at the Baths on Thu 19th May for three nights.  Tickets are £10/8 from http://thepaperbag.bpt.me/

On Thursday 19 and Friday 20 May, 9.30pm, Kabakunst is a collaborative Kabarett Theatre Project including performance and music.  The Creative Martyrs (pictured below) and a whole host of friends come together in the main swimming pool for what List magazine described as “a curious, bawdy hinterland between the Weimar Republic and Noel Coward”. Tickets £10 from www.brownpapertickets.com

Peach, Oscar and the Dragon’s Tears is a modern fairytale for all ages.  Join Louna Productions in the main pool on Saturday 21 May, on this interactive storytelling adventure following a brave girl and her cat – expect swashbuckling fights, singing peas and a caramel munching dragon…that loves heavy metal music!  No tickets are required, entry is by donation to Govanhill Baths Community Trust.

Our in-house theatre company Govanhill Theatre will be staging a production of Morgan Malcolm’s The Wasp.  Directed by Bruce Downie The Wasp tells the story of two old school friends whose lives have taken very different paths brought back together by circumstance – and a case full of cash.  Tickets are £10/8 from www.brownpapertickets.com,  but there are £1 tickets available for each show for people resident in the G42 postcode area – for details of the £1 Govanhill Ticket Offer, email info@govanhillbaths.com or call Jim on 0141 433 2999.

On Thursday 26 May, at 5.30pm, the last of the events about the next stage of The Baths refurbishment takes place.  Following on from the series of community consultations, What Now for Govanhill Baths? Is a panel discussion featuring some the Bath’s most high profile supporters. Nicola Fisher was one the organisers of the Save Our Pool campaign in 2001, A Calder Street resident and respected Trade Unionist, anti-racism and anti-war campaigner, she has been involved for the full 15 years of the campaign and brings a unique first-hand insight.  Darren “Loki” McGarvey is a writer, rapper and community activist. Loki is known for his commentary on arts and politics in Scotland as well as his work in the field of violence reduction, and has been a contributor and supporter of the Baths music and arts programme since the re-opening in 2012. Lesley Riddoch is a writer and broadcaster, whose book Blossom was a best-seller in the lead up to the Scottish referendum.  She has written in the past about Govanhill Baths and community ownership and appeared at several events at the Baths since the re-opneing of the building. Campaigning human rights lawyer Aamer Anwar represented the Save Our Pool campaign and was a Trustee for the Govanhill Baths Community Trust.

This unique event will discuss the way forward for The Baths, what it measn to those involved and gives the public the opportunity to discuss what happens next.  This event is FREE.